Folkert Tazelaar ‘came aboard’ at Gemini in October 2014. First onshore, where he monitored the construction of two offshore high voltage stations (OHVSs). He then made the switch to the construction of the wind farm itself. His primary focus is quality control: ensuring that whatever is built is built properly.

On his LinkedIn page, Folkert is presented as an enthusiastic maritime sailor. However, at Gemini he had to wait awhile before he could set out from port into the North Sea. His first assignment as QA/QC Coordinator was to steer the quality control of the transition pieces, including both OHVSs. “In the phase in which we were working on the steel construction, our team consisted of a specialised paint inspector, a welding inspector and myself,” he explains. “Then, in February 2015, the phase began in which the stations were provided with components (transformers, control systems, cabling and

so on). Then the team was expanded with three electrical inspectors. All inspectors are highly trained people whose work complies with high independent standards. They not only conduct the inspections themselves, but also assess the inspection test plans that the producer prepares in advance.”

The work that Folkert Tazelaar describes here took place just across the Dutch border in the Antwerp suburb of Hoboken, located in the port area. “Our contractor Van Oord outsourced the construction of the offshore stations to the FICG consortium. Fabricom was the lead-manager of this consortium. They have decades of experience with offshore constructions of this kind. Stations like these are produced on an almost serial basis there and are ultimately assembled in an enormous hall. Our OHVSs are four floors high in all. They are complete buildings.” 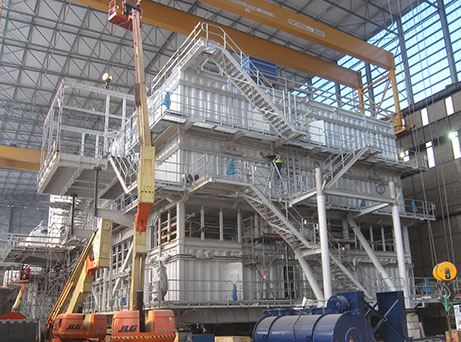 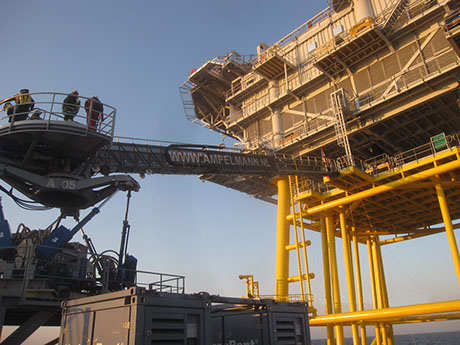 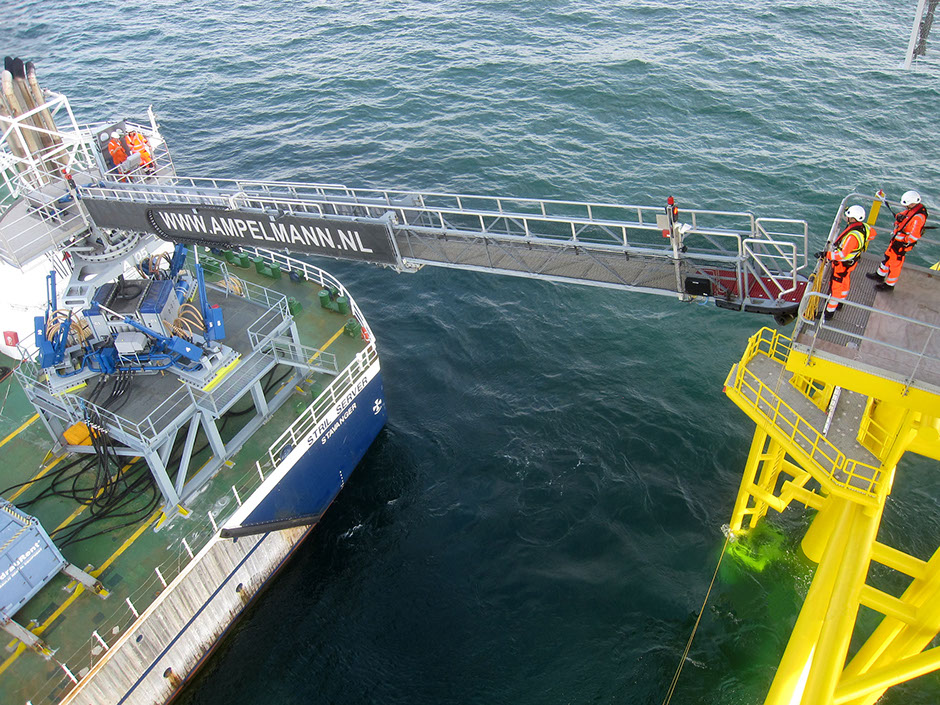 The advanced walkway connects the hotel boat with the OHVS, thus ensuring a safe crossing.

Because he monitored the construction of the turbines and the OHVSs from very close by, it was no more than logical that Folkert should also have been ‘sailed in’ when the offshore installations were commissioned in the autumn of 2015. “The OHVSs were transferred in February and I then also moved to the operations side. That’s what I like about this work, the combination of onshore and offshore,” Folkert says. “I had done offshore supervision in the construction of wind farms before, but Gemini was still special because, as the name says, it’s a dual farm. In practice, that has real advantages, because you can continually make comparisons. For example, if we observe a particular phenomenon at one of the OHVSs, we can immediately check that at the other one too. In terms of troubleshooting, that works very effectively and efficiently.” The dual park is designed to enable the OHVSs to take over each other’s functions. As a result, repairs and maintenance can be performed without needing to interrupt the power generation.

‘I make sure that this

takes place safely and to a

Folkert’s most important task at present is supervising the work on the OHVSs, which primarily concerns finishing of punch items. “With a project like this, you always come up against things in the work that still have to be restored or solved. I make sure that this takes places safely and to a good quality standard. I often do that for a week in succession, then go back onshore for talks with Gemini Operations and the Project Team. We also now have optic fibre on the OHVSs, so the connections are great!”

Folkert makes clear that working days offshore are usually very intensive. “But a stay offshore is very comfortable in the hotel ship provided by Van Oord. In order to reach the OHVSs, we use smaller boats or an advanced walkway. With six large hydraulic cylinders, these compensate for the movements of the hotel ship and press it against the OHVS. With a bit of a swell it almost seems like a fairground attraction, but then a highly functional one. All in all, it’s not quite the same as sea sailing, but it is very exciting!”