He was involved with Gemini right from the start and even named the project. And now Peter Boon is integrally responsible for the quality management. He oversees the whole production, which takes place in several countries at the same time and is proud of the progress being made. “This is a huge achievement. The whole world is interested in it.” 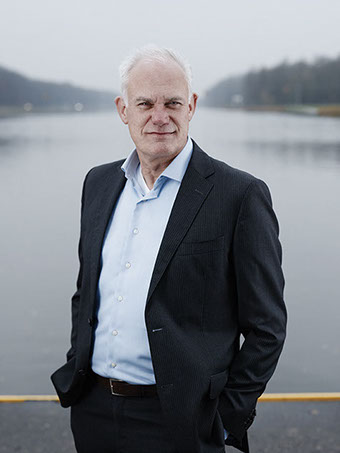 Film As it is in heaven

which we’ve achieved together.’

He can still remember when it all began: in March 2011, Peter Boon became involved in the development of Gemini Wind Park. A technology graduate (mechanical engineering at the University of Applied Sciences in Amsterdam) with a strong genetic influence (“My mother’s brothers were all technical and at home my mother was by far the most practical. As an accountant, my father was much better with numbers”), he eventually ended up working in sustainable energy. “From 2003, I worked for Econcern in Utrecht, a leading company in the field of sustainable energy. In 2006, one of the projects I managed was the construction of a 13 Mw solar plant in Spain. With nearly 30 years’ experience in project work, my knowledge of quality control and standardisation of working methods comes in very useful.”

An introduction to wind energy followed when Boon went to work for Typhoon in 2009, he continues. “In 2010, there was contact with the German turbine builder Bard, which was approaching the Dutch market with a tender for three Dutch projects. For these projects, financial support was available from the Dutch government via the SDE (Incentive Scheme for Sustainable Energy Production, ed.). Bard was successful, because in May 2010, two of the three projects were awarded the SDE subsidy. In August 2011, Typhoon and HVC managed to acquire the following two projects: Buitengaats and ZeeEnergie. Because the two projects were almost identical and also next door to each other, I came up with the name: Gemini. Twins.”

‘Because I had a total view of the project the quality management really appealed to me.’

In his role as project director, Peter Boon took responsibility for the further implementation. A difficult task, looking back: “In technical terms, the project had to be totally redeveloped. We started using Siemens turbines, with a lower power, meaning we needed more. Financially, this also had consequences for the bankability, or acceptance by the banks. The permits, which Maarten Bruggeman was then intensively involved with, were also affected. The layout of the parks changed, for example. But also the Environmental Impact Assessment – what is the effect on the natural environment? – had to be adjusted. It must always be possible to defend any project awarded funding by the government, so that work had to be done all over again.”

But they managed. During the course of two and a half years, they worked intensively on developing the project Gemini. Everything was finally ready in May 2014; the financial close. Boon explains: “Technically the project was totally prepared. All the contributing parties were known and the entire financing of the project had been agreed. Obviously I was also keen to build the project too. Although I’m not a pure specialist, I did have a total view of the project. The quality management therefore really appealed to me. In projects like these, the quality assurance and control (QA/QC, ed.) is often outsourced to specialised bureaus. They often have all the necessary disciplines and usually a resource pool as well. However, I didn’t want to outsource this. The costs played a role too. These bureaus obviously don’t work for free. For this project, I wanted to work with the same people and keep control of QA/QC activities. When you outsource, you often find different inspectors going to the same location for inspection, for whatever reason. I didn’t want that.” No sooner said than done. Boon gathered a team of expert people around him to be responsible for the quality control in the different locations: “That creates continuity, trust as well as commitment: you can rely on each other.” He himself took on the overall management: “Throughout my working life, I’ve always been in project management. Quality is naturally essential in the implementation of projects. I’m the linking pin. I’ve been to most of the production locations myself to keep a finger on the pulse.”

We also had to decide how often to inspect the various production locations: “‘For example, 150 monopiles were made. That means you’re around a lot, particularly at the beginning, checking that everything’s going well and that a constant quality is being delivered – if necessary you make adjustments. After that, you pay regular visits. With the OHVSs, that’s different. These are one offs – only built once in this way, specifically for Gemini. During construction in Hoboken, near Antwerp, we had four or five people on site all the time. A lot of things came together here: steel, coating, electrics, etc. Then you really have to be around. These stations are the heart of the plant. They have to operate at sea for at least 25 years, in tough conditions. We also had an inspector permanently on site at the land station.”

Looking back, Boon is very pleased with the chosen approach: “I think we did well. And other people are really surprised when they hear how we managed to organise the quality management on such a tight budget.” The partnership with Van Oord and Siemens, which both have their own quality officers, also went well. Boon on this aspect: “Before Siemens started the production of the turbines, we drew up a quality activity plan together. This involved conducting quality audits and visiting production and assembly sites.”

Because Siemens also depends on suppliers and subcontractors, Gemini inspectors visited most of these too. Boon: “The whole process in general was well organised and constructive. The feedback that we received from them was also positive with regard to this approach. They learned things from the experience too, enabling them to further improve and optimise the quality. At Van Oord, we heard similar things.”

The basis for quality is laid at the start, Peter Boon explains. “You have to secure everything at the front. The production, the processes, the production facilities, the quality controls, the people who implement them, etc.” However, a project like this not only requires good ‘physical’ production; the associated documentation and communication must also be in order. Boon about this challenge: “All the documentation must be clear. For that, we used a Document Register System, which works on the basis of meta data, with labels and tags. This enabled us to ensure that everyone involved always had the most recent document version, which is essential in such complex projects. For some people, this took a bit of getting used to. They were accustomed to Outlook in combination with Windows folders.”

Construction is now in full swing – more than two thirds of the turbines have already been installed – and Peter Boon is suitably proud: “It’s a huge result which we’ve achieved together. In Europe, in terms of production, this is by far the biggest project. The whole world is interested in it and following us. And the quality of the implementation is proving excellent, which I’m also delighted about. We’ll obviously remain alert right until the delivery and commissioning of the last turbine, but so far so good.”